On episode 99 of the podcast This Week in Virology, Vincent tours the 50th Interscience Conference on Antimicrobial Agents and Chemotherapy (ICAAC) in Boston, speaking with exhibitors and visitors, including Professors Derek Smith, Michael Schmidt, Frederick Hayden, and Myra McClure.

Many thanks to Chris Condayan and Ray Ortega of the American Society for Microbiology for recording and editing this episode. 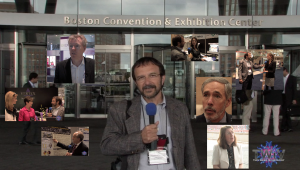