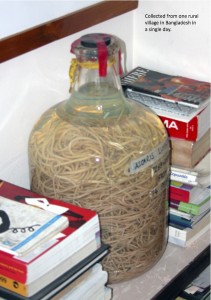 The TWiPians solve the case of the Woman With Anemia, Eosinophila, and a Worm in Her Intestine, and discuss a study on the function and druggability of two malarial aspartate proteases.

From 1990s seen by a colleague, boy late teens, initially presented to ER in US chief complaint, visual disturbances and itching preventing sleep. Immigrated from Oaxaca, searching for work. Lived in modest dwelling with dirt floors, no running water, got from local river. Reports dogs, farm animals, many insects. On exam: tender nodules on head, skin irritated from scratching, small punctate lesions on right cornea. Is referred to specialists. Ophthalmologist called in, referred for further diagnostics.