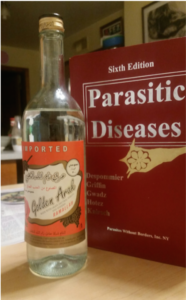 The doctors of awesome solve the case of the Woman Who Visited Lebanon, and reveal that immunoglobulins protect the olfactory organ of trout against infection with the Ich parasite.

From here in US before leaving for Uganda: male has lesion affecting nose. Has been having problem with nose for 2 yr, in 40s, surfer, hit nose with board. Southern eastern Costa Rica. After that had blood and scabs from nose. Inside of nares, scab formed. Did not improve with time. Saw ENT doc on LI, said he hit nose and needs reconstructive surgery. Entire septum destroyed. 20+ years ago had non healing ulcer on left hand, saw physician in CR, was treated for 20 days.