My guess for this case is Entorobius vermicularis aka pinworm. This parasite is extremely common with greater than 10% of the US population likely being infected. Infections travel via the fecal-oral route with eggs being ingested leading to larvae growth within the small intestine, from there the larvae matures to an adult and sets up a home within the cecum and appendix of the large intestine. The adult females migrate to the rectum and out onto the perianal folds (usually at night) and lay their eggs in that area. The adult worm and eggs can be irritating which leads to the itchy anus plaguing our patient. Scratching the skin allows the eggs to spread to the fingers and other areas and thus the cycle can begin again. Treatment would consist of either albendazole or pyrantel pamoate, with pyrantel pamoate being preferred due to the fact that it is available OTC and is cheaper. The difficulty comes in the likelihood of reinfection. By the time treatment is administered, the whole family is likely infected and the household is swarming in eggs. Adults also appear to often be asymptomatic with infection. Treatment should consist of the entire family taking medication at one time (a single dose of either drug is effective), and then a second dose of treatment roughly 2 weeks later to remove any reinfection caused by remaining eggs. Furthermore, as much of the linen, underwear, curtains and other areas of the house should be washed within this period as possible. Lastly, the children should be taught the importance of washing their hands and having short nails.

P.S. As for the pronunciation of certain medical words; I too find myself unsure of how to pronounce certain things. For example:

I’m sorry if what I have above is confusing especially since I am doing this with an e-mail and cannot pronounce these things in person.

Thank you once again for the entertaining and informative podcasts

In follow-up to Vincent’s question on TWiP 132 about whether or not one can acquire Paragonimiasis in the U.S., I happened to find the following abstract via Mark Crislip’s puscast:

Although I can’t read the actual paper because it’s behind a paywall, if I correctly recall Crislip’s comments, one has a pretty good chance of acquiring Paragonimiasis (from P. kellicotti) by consuming raw crawfish right here in the U.S.  However, to my recollection, there was no mention of crabs.

While I am writing, I might as well take a guess at this week’s case study.  I am pretty sure that the NYC lady from episode 132 is infected with Enterobius vermicularis, also colloquially known as pinworm.

The life cycle of this parasite begins with the ingestion of the pinworm eggs, which can be found ALL OVER THE PLACE in houses with small children.  The eggs hatch in the duodenum, where the emerging worms grow and then migrate through the small intestine towards the colon.  Somewhere along the way, the female and male worms mate, the males subsequently die, and are passed with the stool.  The gravid females, however, migrate through the colon towards the rectum, and usually emerge from the anus at night to deposit their eggs around the perianal area.  This is usually what causes the itching sensation.  The reason they need to emerge is because the eggs require oxygen to mature, however, this emergence also causes the mother’s death.

The pinworm life cycle usually occurs over the course of about a month. Treatment with over-the-counter medications such as pyrantel pamoate, or prescription medications such as mebendazole and albendazole is very effective.  However, since these drugs only kill the actual worms and not the eggs, an effective treatment regimen usually requires a second (or third, or FOURTH) dose at two week intervals to prevent reinfection by adult worms that hatch from any eggs not killed by the first treatment.

According to “a friend” who recently suffered from this affliction, the movement of the worms is probably THE MOST disgusting sensation that “this friend” has ever sensed! One can diagnose this infection by doing the “scotch tape test”, although why one might want to do that is beyond me.  I would think that the itching on its own would be indicative enough to immediately seek treatment.

Lastly, I think that giving an episode summary at the end of each of the TWiX podcasts is a great idea, because even though I am a loyal fan, my mind does tend to wander sometimes when I listen.

Thank you for your continued diligence!

Thank you for the entertaining and educational podcast. I have enjoyed listening to them on my commute in the DC region, where it is an Endor-esque 68 degrees Fahrenheit today.

My guess for the diagnosis is pinworms! As far as my thought process goes, upon hearing the words ‘iching’ and ‘perianal region’. I immediately thought of TWIP #19. Relistening to the episode seems to confirm my diagnosis.

To test this, do a sticky-tape test on the perianal region of all suspected hosts at night. NB: Can use dolls as props, but in that case if the patient speaks Spanish and not English, also add this addendum: “Hazlo a la persona, no a la muñeca”.

As far as advice to give to the patient:

1) Don’t panic! Everybody gets this worm at some point. You can quote Dr. D. on this from TWIP 19: “Nobody is dying from this thing, nobody ever did, and nobody ever will.”

2) Some people go overboard and become hyper-clean. Avoid this if possible as it can add a lot of stress and may be counterproductive, as unknowingly spreading the eggs all over the room can continue spreading the infection. 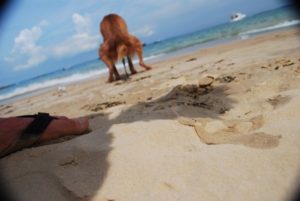 4) Treat with mebendazol until itching goes away. Itching may come back. If it does, come get some more mebendazol. At some point, the infection should clear with this strategy.

As an aside, listening to the TWIP on toxacara canis reminded me of this picture I have attached which my little brother (who is an award-winning photographer) took at one point from a beach in Brazil. Enjoy!

Hello again TWIP-tastic peeps! This is Nita again, the silly hopeful neurologist-to-be. I am glad to hear that the castrating barnacle was amusing! For this week, our young NYC woman experiencing anal itching for a few weeks puts pinworm on the top of my differential list. Often contracted by children through fecal-oral contamination, female pinworm crawl out of the anus at night and causes itching with egg-laying. The child then scratches and often ingests the eggs at a later timepoint, thus reinfecting the poor victim. The itch-scratch-itch cycle is perpetuated, and the child can easily pass this on to the rest of the family. In our patient, because of frequent contact with children and a son with similar symptoms, pinworm seems to be the most likely cause. Treatment is usually mebendazole.  Another parasitic culprit includes scabies, though it’s kind of unusual.

There are also other sources of infection, such as candidiasis, yeast infection, or HIV that should be investigated.

Thanks again for the amazing podcasts!

I’m a relatively new listener, (a grand total of two episodes) and this is the first time that I’ve e-mailed the show.  I work in law enforcement, and listen to your show while I’m on patrol.  I really enjoy the case studies and as a total layperson, am glad to be able to understand about 40% at best of the science you talk about in the papers you review. Please, keep up the good and entertaining work.

Pinworm infection can be diagnosed by what seems to be rather obviously called the “tape test.” Upon waking, the host can place the adhesive side of transparent tape to the anal area, and should be able to collect pinworm eggs, which can be viewed under a microscope. The information I’ve found says that the most common treatments for pinworm infections are the following three prescriptions: mebendazole, albendazole, and pyrantel pamoate, as well as good hand hygiene, as the eggs are often spread by hosts scratching the itchy area, and collecting eggs under their fingernails.  I’m at the mercy of the internet for all of this, so I hope this information is correct.

It’s a  beautiful day in eastern Nebraska, 70 degrees with a light north breeze, low humidity, and barometric pressure at 30.11.  Thanks again for putting so much time into entertaining and educating me and others.  Between TWIP and TWIV, you’ve inspired me to become interested in science in a way that I haven’t been since college.  Have a great day, and keep up the good work,
Caleb (pronounced Kay-lub)

Perhaps a Believe It or Not feature might be of interest on TWiP.  A candidate might be the Candiru:

The article is sceptical and that’s good.  That being said — if memory serves me correctly -in a tropical fish publication on Piranhas Candiru attacks are mentioned.  The story was that the indigenous people living on the Amazon only feared the Candiru and the sting ray — not piranhas, electric eels, big cats, or reptiles.

Burroughs mentions the Candiru, too:

On a separate note, Bradbury seems to have Delusional Parasitosis in mind in the Illustrated Man.  In that book, Ray Bradbury has his protagonist say this about his tattoos:

“Sometimes at night I can feel them, the pictures, like ants, crawling on my skin.”

Here is a bit of additional information on the mosquitoes/mosquitos “controversy”.

I came across the diversity in spelling in a tweet by Darren Naish.

As I had Parasitic Diseases 6e open on my computer, I searched for both spellings and was slightly surprised to see both variants, so I went to Google Books Ngram Viewer

It appears the usage drifted towards ‘mosquitoes’ starting in the early 1820’s but ‘mosquitos’ has never completely disappeared from usage.

As to the pronunciation of my name, there are two answers as I have lived 30 years in California and I gave up a long time ago to make Americans people use the Swedish pronunciation. People just don’t hear what they are not expecting.

So, here is the American version followed by the Swedish version.