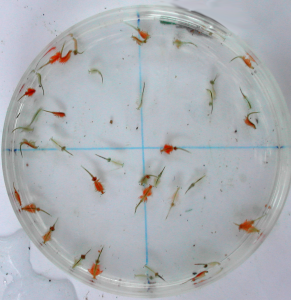 The TWiPanosomes solve the case of the Young Man from Anchorage, and discuss how cestode parasites increase the resistance of brine shrimp to arsenic toxicity.

This week’s case involves a 32 yo male with several concerns. Spent 6 weeks doing religious missionary work in Kenya, performed baptisms in Lake Victoria.Waist deep in water, no shoes. Took malaria drugs, ate lots of interesting foods: cichlids, ugali, corn based food, flavored with greens; stew with some sort of meat, beef and goat. Five weeks after return developed rash with fever, shortness of breath. Three of four friends who were with him in Kenya reported similar symptoms. The fourth who did not get sick did not go in water, nor did he eat very much. No medical/surgical history, no drugs. Had some sexual activity while there. Elevated white count, 70% eosinophils. Chest CT shows nodules in lungs. Doc told him, allergy, you will be fine. The water he went into is near a village, there are rodents nearby, and a runoff.