In TWiM 71, Professor Schmidt posits that research in the human microbiome begins with the question “Who’s there?”  That roster very likely will be a Who’s on first, What’s on second taken to the nth degree.  When — as you mentioned — interactions are considered, the task of explanation appears daunting.  Whenever the keys indeed are found under the streetlight in the form of a phage, that will make solution discovery tractable.

Stool transplants sometimes seem to have about as much theoretical framework as the funerary cannibalism of the Fore people of Papua New Guinea.  And similarly risky, too?

What are the new findings?

Though in TWiM 157 Dr. Schaechter was mistaken concerning the brand, calcium carbonate indeed is an ingredient in antacid remedies. 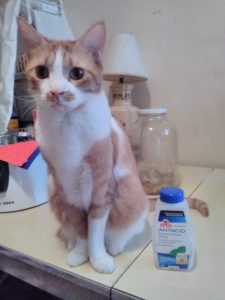 The cat’s name is Blake.

A quick comment on episode 158. There was a brief diversion into animal prions while discussion the PNAS paper on Prokaryotic viral sequence in the brain.  Someone (I won’t mention any names) said that bovine spongiform encephalopathy (BSE) was created when scrapie from sheep passed to cattle through contaminated meat and bone meal in the UK.

This was an early hypothesis that has not been supported by studies conducted here or in the UK. The scrapie agent will cause disease in cattle after intracranial inoculation, but  the pattern of lesions can be differentiated from BSE and the molecular profile is different than BSE when examined by western blot. Attempts to infect cattle with the scrapie agent via oral challenge have failed, whereas oral transmission of BSE occurs readily .

In summary, it’s complicated and not as simple as BSE coming from sheep.  Where did BSE come from? If I started on that topic, then this would no longer be a quick comment.

Keep up the good work,

I don’t think this has been covered on TWiM before.

To interest young people in the issue of antibiotic resistance, Dr Adam Roberts of University College London developed the ‘Swab and Send’ citizen-science project to get people actively involved in the search for new antibiotic compounds.

Members of the public to swab and send – swabs taken from everyday objects in the local communities are sent to his lab for analysis for antimicrobial activity.  Improving awareness of antibiotic resistance and contributing search for new products.

Details of the project here http://www.ucl.ac.uk/amr/outreach/case/swab