Hi. This might be more appropriate to TWiM, but your wonderful discussion with Mya Breitbart, and then the long letter about nuclear power reminded me of an amazing story.

I am (more like used to be, although once an X always an X) a marine microbiologist – alas not virologist, although I thought about it. My focus was on marine cyanobacteria. As you may know these are among the most important organisms on the planet — creating around half the oxygen, and sinking around half the CO2! Also, so interesting, the photosystem in the Cyanobacteria  is essentially similar to the that of terrestrial plants, so maybe a billion-year-old endosymbiotic event created terrestrial plants from cyanos.

Anyway, I once got the chance to give a talk to the uber-director of ARAP-e — the energy version of DARPA. The talk I was giving was on a completely unrelated and relatively uninteresting topic, but since I was facing perhaps the one person in the government who is supposed to think about cray energy solutions, and has the money to do them if he chose, I decided to roll out, on my first slide, my favorite insane energy idea, which is to flood the Sahara desert with sea water and turn it into a gigantic cyanobacteria farm which would draw down enormous amount of CO2 while simultaneously creating an enormous about of carbon-neutral fuel, which Africa could sell to the rest of the world (or re-burn and sell the resulting electricity).

For fun, I’ve attached the first slide from that 2011 talk. (The big black blob is where seawater would be pumped in from the Atlantic to form a giant, perfectly ovoid, lake!

Unsurprisingly, they didn’t jump up and suddenly fund me for this genius idea! 🙂 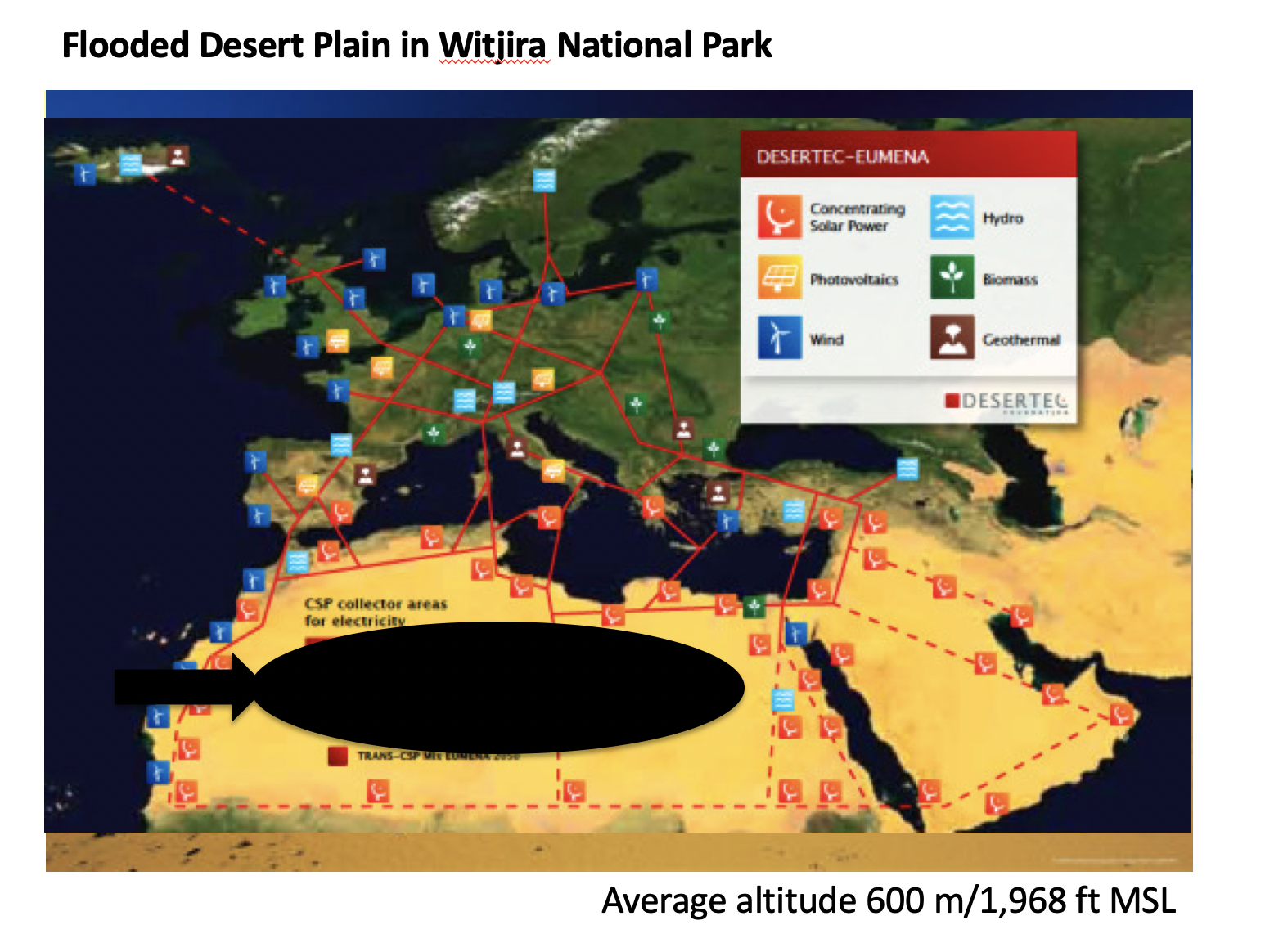 I know nothing about the why but I’ve seen mesmerizing maps of the changes of the meandering of the Mississippi River. Here are the biggest scans I could find:

thanks for your amazing work.

I wrote earlier this summer while I was in Bulgaria. Back in the US now in our highly vaccinated county and city. The situation in Bulgaria, sadly, is worsening which probably can be partially attributed to the political crisis there.  Delta is now dominant, many people are getting sick and mortality is growing because still a very small percentage of the population is vaccinated and masking is sporadic.

The first vaccine available there was AstraZeneca which is what my parents received. My opinion based on what I read early on is that it’s a perfectly fine vaccine but it got discredited by the overreaction to the possible complications and the general excitement over the MRNA vaccines.

Your discussions cover mostly publications about the other vaccines but can you share some resources about how AZ fares against Delta?  I realize that Pfizer-BioNTech is the most studied and the most administered around the world, but somehow I don’t see much published on AZ and Delta. I suspect it’s because the US scientific community dominates the publishing space and they study the vaccines available here or my sources tend to be US-focused. I know AZ has been widely administered globally. I work with health care providers in many LMIC countries and most have received AZ.

I am curious in general about AZ’s protection against severe disease but especially because my parents are in the age and pre existing illnesses group that could potentially experience severe disease if they got infected. Looking forward to your comments.

Many thanks again for all you do.

I often hear people say that we should vaccinate the world to prevent the development of more transmissible or immune escaping variants. If you believe that sars-cov-2 will become endemic, does this argument hold water? It seems like even vaccinating everyone right now would prevent a relatively small fraction of all future infections, any of which could in theory lead to a dangerous variant.

This is not to argue against vigorously exporting vaccines; clearly it’s imperative on humanitarian grounds as it would prevent a huge amount of suffering and death.

Thanks for your insight and all you do!

First I want to thank you for your tireless work and wonderful podcasts.  They have helped keep me sane during the pandemic, and are an amazing resource for quality information and entertaining discussions.  I mostly listen to TWiV and the Clinical Updates, but delve into TWiP, TWiN, TWiEVO and Immune on occasion too.

I just finished listening to TWiV 804 with Mya Breitbart, hearing about her virus discovery work.  It reminded me of how little we know about viruses and really all life on this planet.  That thought, along with the Letter read from Dave about fixing global warming, prompted me to write and suggest the book, “A Life on Our Planet: My Witness Statement and a Vision for the Future”, by Sir David Attenborough as a listener pick.

I read this book when it came out and was immediately struck by it, and recommended it to all my family and friends.  Being from the UK, I grew up on David Attenborough and could not help hearing it in his voice as I read.  Dickson often gives me David Attenborough vibes, and I think he would enjoy this book.

It is part autobiography about Sir David’s amazing life, and (per the subtitle) a witness statement of how drastically man has changed our planet, even within his own lifespan.  In the beginning of the book I felt some despair at the mess we are in, but thankfully Sir David adds a Vision for the Future that offers some hope, if only we have the will to do what is needed.

In my opinion this is a must read and I truly think you would enjoy it as well.

Link to Wikipedia entry about the book (for Rich)

Link to book on Amazon

I found your excellent podcast only about a month ago, and since then I’m hooked on your insightful discussion of the research around SARS-CoV-2 and virology in general. Thank you all. I’m a software developer, having a fascination with biology since childhood, but alas it was more easy to experiment with computers than viruses.

However I recently found a conversational technique called “Street Epistemology” that can be summarized as “helping people to reflect on the reliability of the methods used to arrive at their deeply-held beliefs.”

It makes the the seemingly impossible jump of somebody holding a belief with a 100% certainty, like “vaccines are bad”, to have at least a sliver of a doubt. In this new state of mind they are able to start using facts and data to slowly change their own views. This is all done while being non-confrontational and respectful to the other person, which I have to admit, struggled with before.

In case you’re interested, check out the last hour of this podcast called “You Are Not So Smart”, episode 213 – “How to improve your chances of nudging the vaccine hesitant away from hesitancy and toward vaccination”[1]. There are other great methods discussed in the episode and also an example of using Street Epistemology with somebody at an anti-vax demonstration at the very end.

I hope you and the listeners find this information useful.