Near the end of TWiV 517, there was a mention of HSV-1 and Alzheimer’s (AD). You expressed a disagreement with a news headline referring to a mounting evidence for an HSV-1 involvement in AD. As you know, I work on antivirals and the recent 2 papers published in Neuron last July (discussed on TWiV 505) sparked several discussions among my colleagues about the possible role of herpesvirus infection in AD and whether antiherpetics could fit into the picture. Since then, I have been diving into the literature to try to understand what this is all about. I was stunned by the body of data supporting an infectious cause for AD. I think you might be already familiar with this hypothesis, but for the uninitiated TWiV listeners, please allow me to give some background. For quite some time, amyloid-beta has been considered as a functionless catabolic byproduct. However, numerous studies suggested that it is an innate antimicrobial peptide, which exerts its activity via aggregation into plaques, a characteristic feature of AD. This is commonly referred to in the literature as the “bioflocculant hypothesis”, where amyloid-beta oligomers agglutinate pathogenic agents in the brain, and by so doing they would limit their spread and prepare them for phagocytosis. Indeed, synthetic amyloid-beta exhibited potent in vitro antimicrobial activity against some viruses, such as HSV-1 and influenza, but not adenovirus, which led some authors to conclude that amyloid-beta interferes with fusion with target cell membrane. Furthermore, in vivo data by Kumar et al suggested that amyloid-beta protects against fungal and bacterial infections in mouse, nematode, and cell culture models of AD. Also, clinical trials of anti-amyloid-beta therapies in humans frequently reported adverse effects, suggesting a dual protective/damaging role for amyloid-beta.

With regard to HSV-1, I am actually inclined to agree with the news headline that you didn’t like. After consulting with the body of literature that I came across, I think there is considerable evidence supporting HSV-1’s involvement in the pathogenesis of AD. I am attaching few papers and reviews for your reference, but will summarize some of the findings that caught my attention. I would particularly like to invite you to check out papers by Wozniak and Itzhaki. In AD brains, HSV-1 DNA colocalized and was found to be associated with amyloid plaques by in situ PCR. I know that you are going to say that this is latent DNA, not virus. Surely enough, anti-HSV-1 IgM antibodies (indicative of primary or reactivated infection) in CSF significantly increased the risk of developing AD, suggesting that reactivated virus played a significant role. Several meta-analyses concluded that HSV-1 (and other infectious agents) are associated with increased AD risk. Antiviral treatments greatly reduced amyloid-beta accumulation in HSV-1 infected cells. In HSV-induced encephalitis (HSE), the main regions affected, the frontal and temporal cortices, are those showing the main pathological changes in AD.

It seems to me that repeated reactivation of HSV-1 in elderly brains, probably as a result of immunosuppression, causes gradual cumulative damage and eventually contributes to the development of AD via the formation of amyloid plaques. I am actually more inclined to believe that HSV-1 is not the sole agent and other neurotrophic pathogens could be involved as well.

You have promised to dedicate a TWiV episode to this intriguing topic and I look forward to a hot discussion among the TWiV team.

Thanks very much for reading my long email.

The weather is humid as usual and 82F/28C in New Orleans. Rich Condit asked me this weekend if I had written in to Twiv and I embarrassingly had to say: Not yet. Decided to change that as I’d like to share Twiv’s impact on my life. Two summers ago, I was in the midst of choosing where I wanted to pursue graduate school. As I was home in Sweden and helping to mow the large lawn I used that time to listen to Twiv and Twim. I can associate Zika epidemic updates, Hepatitis C and Polyomavirus episodes with certain acres of grass that I mowed. It was at that point I decided I wanted to pursue research of viral-host relationships for my PhD. Fast forward to now, I now study determinants of congenital Cytomegalovirus transmission in a Rhesus macaque model at Tulane National Primate Research Center in Covington, Louisiana. I recommended Rich Condit for Tulane’s annual biomedical sciences retreat so hence I got the honor to meet of one the Twivos in person. He held an amazing keynote talk on his experiences as a scientist, a constant fan of nature and values which aided his career. Many people told me right away that he did a great job and was a perfect speaker for the occasion. Thanks again Rich, I hope the WWII museum was good.

Now that I’ll soon be done with my classes, my one hour commute from New Orleans to the primate center will be filled with Twiv episodes instead of lectures. I can’t overstate how much I am looking forward to that.

P.s. my mentor is an immunologist and I am trying to get her into listening to Immune. 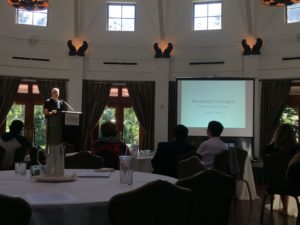 Attached is a proof of Rich’s useful absentee from the last recording.

Hello, I’d love to say I’m a long time fan but I actually started listening last week due to a suggestion by my Microbiology lecturer!

I really enjoyed last week’s episode and you’re all great personalities. The one thing I wanted to say is please look into the Glyphosate paper more!

I’ve read it myself and it’s rather questionable. A few of the papers it cites itself are pretty questionable too and already “debunked” so to say. I’m no Monsanto fan but this paper is so fatally fundamentally flawed even in its foundations.

Here’s a YouTube video if you want a good summary: https://www.youtube.com/watch?v=xdnW8ldDoZU

I’ll be listening next week!

I’ve only recently started listening. Honestly, most of your episodes go a little over my head (I’m just a lowly Public Health BS), so I usually have to spend a good amount of time pausing and googling to figure out what you’re talking about. I love doing that, though, because I encounter new things all the time!

In a recent episode, TWIV511, you interviewed Ned Landau. At one point he mentioned APOBEC3G, which, after much googling, eventually led me. to the field of restriction factors. From what I could understand it seems that these restriction factors may evolve quite quickly, suitable for countering viruses that can mutate quite quickly. I was just struck by the dramatic nature of the whole scene: our cells and viruses, duking it out on a relatively short timescale. Each RF and its virus a sparring partner. It seems to me such a moving example of evolution.

I don’t know if any of this makes sense, but would love to hear your thoughts on the evolutionary aspect of restriction factors.

Just sending two pictures of one of the talks of the V National virology meeting That is happening today in port. The talk from São José Maria Alexandre about EV D68 and EV71 and acute flaccid myelitis.

My best regards, please extend my compliments to all the TWIV team for your wonderful dedication.

Today I was in the V National Virology Meeting from the Portuguese Virology Society.

Very good virology, full of food for our brain. Many TWIV fans too.

But I’m writing to you because the last words of the meeting were for someone who is identified as one of the top virologists in Portugal, Professor Maria Odette Santos-Ferreira, she died at the 8th of October of 2018.

Her eureka moment was with her involvement with the discovery of HIV 2 with Professor Luc Montagnier.

Even at the age of 93 she was able to secure funding for the research of her Faculty (Pharmacy Faculty University Lisbon, https://www.ff.ul.pt) through grants.

On top of her extensive dedication to science she was also involved in our national program for the eradication of AIDS and was responsible for the program with the best results in the reduction of HIV infected drug addicts, “Say no to a second-hand syringe”. The program allowed drug addicts to exchange syringes on pharmacies so they would not share contaminate needles. Taking this population from the most affected to the lowest one, in few years.

There is a small movie you can check out if you are interested.

I know it is not of me to ask but if You could share with the TWIV audience, I would appreciate.

My best regards to you, and of course to ALL the TWIV team.

Thanks to Vincent for his visit to Hershey last week.

It’s a story about Bruno LaTour, a French philosopher and his life-long love affair with science.  He argues that science strives to attain an increasingly more accurate description of a reality that lurks beyond our senses and their technological extensions.  The process of doing so is very messy, non-linear, and all too human. Fair enough and something with which probably most or all of us would agree.

More controversially, he says that facts don’t speak for themselves.  Rather, their authority derives from the culture and society in which they are generated.  Seems like the evidence for this position has strengthened considerably in the last two years or so.

There are implications for how science communicators should approach the challenge of science denial.  The latter arises out of a subculture that maybe was growing all along in parallel with the growth of the scientific enterprise…and more recently has been juiced by post-truth positions not nearly as nuanced as LaTour’s.  For these deniers, claims of the authority of science have no value. I suspect that, for the zealots, once they have joined that community they are a lost cause. We probably shouldn’t waste our time with them. Better, like twix, to build a wall of informed non-scientists: exploring the exhilarating and messy process, and demonstrating the inherent and utilitarian value of the knowledge we gain.

Professor Emeritus of Microbiology and Immunology