I was listening to TWIM 149 on my bike ride to work this morning and would just like to express my complete support of all the arguments in favour of mSphere direct way of publishing discussed in this episode.

We had also recently published our first Zika virus paper via mSphere direct route (Setoh et al., mSphere 2017, 2:e00190-17) and I couldn’t be any happier with the process. The whole process from emailing the paper to reviewers and to the acceptance by the journal took less than a month and then the paper was published online within 2 weeks after acceptance. It was crucial for us to be able to do this quickly so we could add this paper to our grant rebuttal. This would be very difficult/impossible to do via traditional journal reviewing process for a paper that was not even completed at the time of grant submission as the time between grant submission and rebuttal here is usually less then 3 months.  Some could say that this process is biased, but having the names of the reviewers listed on the title page of the paper and the complete transparency of the whole process in my opinion eliminates this issue. In our case, the reviews were as thorough as they would be via traditional reviewing process but without nasty comments that one would sometimes get from negative reviewers.

I also liked the discussion on the benefits of preprint publications, particularly for younger researchers – being able to send a link to the preprint article would be much better way of providing the evidence of expertise/experience for the job and grant applications.

I would predict that other journals will soon follow mSphere – hopefully, this will not overwhelm prospective reviewers as I can see that some of them may be quite popular.

All the best from a winter Brisbane where the weather is currently 22 degrees Celsius and sunny with some puffy clouds.

Professor of Virology and NHMRC SRF

School of Chemistry and Molecular Biosciences | University of Queensland

When I heard the term, I expected Elio to say moonmilk was mostly composed of calcium sulphate (gypsum/plaster of Paris), because a particularly pure and beautiful crystalline form is called Selenite, after the Greek for the Moon. It is easy to imagine that similar deposits in caves below gypsum containing strata (as with the bus-sized crystals in the Giant Crystal Caves), would have been called moonmilk, as miners would have assumed that to be a likely source.

It was not too much of a set back to hear that this mushy substance was in fact calcium carbonate, because it can be quite hard to tell the difference between crystalline CaCO3 (as in Iceland Spar) and CaSO4 (As in Selenite. You can scratch selenite with your thumbnail, but not calcite.) and early peoples would be likely to have applied‎ the same name (We call blackboard ‘chalk’ chalk (CaCO3), even today, but it is gypsum.).

In fact, Wiki tells us that, before the 1500s, selenite would have meant any clear crystal, because they were thought to wax and wane with the Moon. Only in the 1500s did the name get affixed to what we now call selenite. I’d hazard a guess that this ties in with the development of chemistry, and the need to specify the clear crystal with the properties you need: gypsum for plaster; Iceland Spar calcite for optical polarisers in the new science of optics.

When you go into caves with stalactites and stalagmites in‎, you will notice that the walls are usually coated with similar deposits, but in more laminar form. It is easy to imagine that in very damp, but not regularly flooding, caves, there would be a biofilm on the surface, that would have to keep moving up to avoid being permanently set in stone. I can further imagine, that, if there was enough nutrient available, the microbes might grow thick and fast enough to maintain a mush rather than allowing the usual build up of the beautifully striped layers we see in cut and polished cave deposits.

You have previously covered the ‘snottites’, I believe. I can imagine these would be the result of microbial films growing where there were less of the concretionary sparingly soluble salts available‎, but a range of possible forms seems likely between the moonmilk mush, and the snottite.

Thinking of the finely striped deposits, and microbes together, reminds me of the structure of stromatolites, and, though these are marine, I wonder if your moonmilk researchers have compared the microbes in the two forms. Certainly stromatolites have been around longer than almost any other living thing, and there should be some ancient genes to find there.

This little train of thought further leads to another interesting transition from Moon to Sun, because, it turns out that the optical qualities of Iceland Spar, are thought to have led to it being used by the Vikings, as a ‘Sunstone’, through which they could detect the polarisation of sunlight, and, hence, the direction of the Sun, even when behind clouds, or below the horizon.

See what interesting trails one can follow from the savouring of a new word, or a snippet. 🙂

Incidentally, in the UK, you would find a few orange cup fungi, though not usually at the hight of Summer (has it rained a lot in your garden lately?). There are two or three species of Peziza, called ‘Orange Peel Fungi’ in the UK, and a smaller, rounder, little beauty we call an ‘Eyelash Fungus’ because the orange disc, has a fringe of brown ‘lashes’ around the rim.   When you are looking at your soil and the plants in your garden, you would probably like to have a good 20x hand lens on a thong round your neck, to really get up close and appreciate the fine structures of nature. The miniature cup fungi, often have delicate fringes or rims of droplets, and you’ll be amazed at the enormous variety of ‘hairs’ everything is covered with, for starters. (Best not trust the ads for 20x or even 30x lenses you’ll see on Amazon. In the UK, at least, these usually turn out to be only 2 or 3x, but most people who buy them don’t realise.). :/

All the best to you and the team.

Ooh, and, serendipetously, in Luton, I’m just up the road from Anna, in Harpenden, who won your book this week. I don’t know her though (I think!), but there are some marvelous fungi on the golf course there, and it is the home of the famous Rothamsted research station, which is still running one of the World’s longest running experiments (began 1856), and was the home of John Lawes, who, more or less, invented artificial fertiliser.

Weather rather wet and windy, and more like Winter than nearly August, at the moment!

‎https://en.m.wikipedia.org/wiki/Aleuria_aurantia (these last two both used to be ‘Peziza’ when I started. :/ )

https://en.m.wikipedia.org/wiki/Scutellinia_scutellata (This one is really beautiful up close.)

You may also see brightly coloured cups as the fungal component in some of the lichens in your garden.

I enjoyed the discussion of read Yohann’s question on TWIM #157, especially Elio’s advice to study math. I’d like to turn that question on it’s head though and ask my own version.

I’ll be finishing my Ph.D. in Statistics this winter, with my research focused on bioinformatics for microbial ecology, and I will be starting a post-doc in a microbiology lab after defending. I am quite fortunate because it’s a strong group with a great track record and I’ve enjoyed all my interactions with the PI so far. I’m a bit nervous though because I have not taken a single biology class since 9th grade. And while I’ve naturally learned a lot in the course of my research, it’s been mostly self-directed reading with a lot coming from Wikipedia. (Actually, I’ve arguably learned more biology from TWiM than anywhere else, so a big thank you to you folks.)

I was clear about this when I interviewed though, and I’m definitely comfortable with biological sequence data and programming so I shouldn’t be totally lost. But it’s still an open question to me what minimum level of basic training is needed to be able to hang with 15 microbiology PhDs. So I’m wondering: what advice would you have for a someone in my situation? What are the most important things to be familiar with before starting?

Thanks for reading this and for everything you do in putting these podcasts together. I really enjoy them.

I have had this letter on my mind for a while, but I apparently cannot get pen to paper as quickly as I want.

I am a horse trainier and avid listener to ALL episodes of twiv, twim and twip. You help me remember my past scientific life, even as I am immersed in farm life.   As non-sequeteur as it seems, the copper revolution has even infiltrated the horse world.

Horses step in all kinds of crap, literally. Horse owners battle foot health all the time, and people have fretted for millennia about this little horseshoe problem because you know the age-old saying: “for want of a foot the war was lost”.

Anaerobic bacteria can wreak havoc on the quality of the hooves and cause things like thrush and white line disease. In the last year, farriers (the name for the professionals who not only nail shoes on my horses’ hooves, but they help keep a balanced hoof to keep the horse sound)  they have started to use copper coated nails. Here is a photo of them: 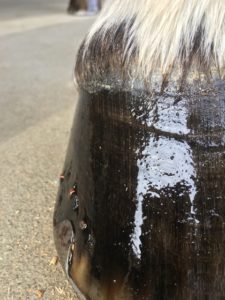 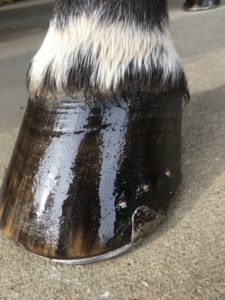 It was a bizarre meeting of the interests of my life to see copper anti-microbial technology hit the horse shoeing world.

As ever, thanks for keeping my science alive, even though I am a farmer.