So I think I have a bingo. I had originally thought that when you talked about the competition, it was only for episodes after you released the bingo card. I later found out that we could use older episodes and then went to download a long list of episodes for a long trip that happened to land right after I finished the latest TWiV.

I’m not sure if it had to be word for word, so if it got somewhat close I put it down and kept listening for a more accurate use.

I have for the right column.

We have a show title – Ep. 495 – at the end, you were talking about show titles, not too sure about this one.

I have a great view from my office – Ep. 495 – 1:50, Kathy said that the view was gorgeous, which I personally liked better than great.

Genetic arms race – Ep. 495 – 49:50, Everybody was talking about how the cabbage hadn’t had time to think about the hyperparasitoid and Kathy mentioned an arms race, however it wasn’t in a genetic sense.

That was the first bingo that I found, but while listening to the episodes Vincent was mentioning how he got an email from someone talking about chainsaws, I heard you talking about the story arcs, but never heard “This is another story arc”

I liked listening to the backlog, but doing multiple episodes in a day has given me a real appreciation of the time that goes between episodes.

I think I’ve got BINGO! I do hope other listeners play too. It didn’t take all that much work or time. Plus it gave me an excuse to go back and listen to some classic old episodes!

I filled the positions in the top row of the bingo card. The episode, time, and quotes are provided below. The wordings aren’t exactly precise to what is written on the card, but I hope they’re close enough to count. If not, I can always take another stab at it.

Keep up the great podcasts,

A4 – Vincent: “No offense to our TWiV listener in Brownsville. I’m sure you have a good pizza place, right?” Rich: “We’re gonna get mail. We’re gonna hear from Brownsville.” Vincent: “Nah.” Episode 420: Orthogonal Vectors (25:52) 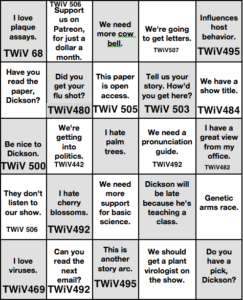 I am writing to show you that I got a bingo. It was harder to complete than I expected! It wouldn’t surprise me if others also need some time to listen to old episodes or wait to hear these come up in the new ones. I am wondering if something like this could be used when implementing podcast episodes in a class as a way to guide students in their listening.

And second, my listener pick is the article series called Research Matters published in both PLoS Path and PLoS Biology, “in which active scientists speak directly about why basic research in their field matters”. I like them because they are short and tell the people stories behind why basic research is so important.

I’m a graduate student at UW-Madison and a long time listener to the show. When I heard that Vincent’s latest contest for a principles of virology textbook was doing a bingo of old phrases used in the show I thought I had this in the bag! Boy was I wrong. Despite having a pretty good memory, I spent over 40+ hours going through the old shows. Even worse, I found that while I had a memory of the phrase being said, I couldn’t figure out which episode where the phrase was uttered! So I had rows where I had 4/5 items. Fortunately I can listen during my lab work and I always enjoy broadening my understanding of virology.

For the bingo (or at least I hope it qualifies as a bingo),

Support us on Patreon for just a buck a month

Did you get your Flu shot

We’re getting into politics

Can you read the next email?

I have three additional items my email.

First a fun story that will make the plaque pack happy. One day at lab my PI asked me how a plaque assay works. I should note that I work in a Epstein-Barr virus lab where the virus is quite content not killing the cells (thus making a plaque assay impossible) and so this could have been a more difficult question than it first appears to other virologists. It had been quite awhile since I had taken my basic virology course, but fortunately I had recently listened to ode to a plaque (Twiv 68) and I was able to answer this question in exquisite detail. I will now always know how to conduct a viral plaque assay and I will never consider qPCR for viral genomes a substitute! I cannot thank you folks enough for doing this podcast and sharing the collective knowledge each of you have accrued over the years.  As long as this wonderful group keeps podcasting I will keep listening.

A listener pick from me: For exercise enthusiasts on TWIV there is an app called Charity Miles available. When you walk or bike a certain amount of miles, this app will donate money (about a dollar every four miles) to a cause of your choice. One of the charities is Shot at Life, which provides measles vaccines to children who cannot otherwise access them. A dollar every four miles some of you might scoff!? Well as many are aware vaccines are an excellent investment, so even if you are only putting in a dollar towards this cause the economic benefits are around forty-four dollars in return. This is not to mention the importance of protecting the most vulnerable from preventable diseases. I hope that this app gets the TWIV bump.

Finally, chronic wasting disease (CWD) sometimes is covered on this show. I am aware that there are no known human cases associated with CWD, but has anyone investigated if coyotes or wolves might have caught this disease? My reasoning is that these animals are more likely to eat the entire deer. This distinction is important because if I remember correctly, Kuru (a human prion disease for the uninitiated listeners) was only spread by from person to person because individuals would eat the brains of the infected deceased. It is surprising to me that only deer have been documented to suffer from this prion disease considering how so many different animals like to eat them. However, a possible answer is simply that a prion disease takes a long time to manifest and the predators that eat deer generally do not live long enough for CWD to develop in these animals.

Thanks for all that you do,

You don’t have to read out this part,

I urge everyone listening to this podcast who hasn’t yet done so, immediately set up a monthly donation to TWiV.

You probably don’t think twice about adding a $1.00 candy bar or $1.50 soft drink to your weekly or bi-weekly grocery shopping cart.

Do the world (and your health) a favor and set up an automatic Patreon contribution of that money.

And when you’re standing in the checkout line, remind yourself that you have already used that money to do something good for many, and not do something bad for yourself.

[Vincent: Feel free to read this rant on all the other podcasts.]

is hugely interesting in its own right, I thought for dedicated anti-vaxxers this statement in it was especially noteworthy:

“’When you’re fighting bacteria that can double in number every 20 to 30 minutes, every moment matters. To put it bluntly, if your immune system takes too long to assemble the tools to fight the infection, you die,’ he says.”

Today’s Sun Sentinel newspaper had this picture of a VW Beetle decorated with various cell paintings and this “mega  virus” on the roof. Science, writ large!

I was unable to google any information about the artist or owner, who undoubtedly is a scientist.

I just listened to twiv 508. It was a very interesting episode. Here is the amazon link to a book written by one of the defectors mentioned on the podcast

Still on TWiV 508, during Jens Kuhn’s exposition the question came up of why Hitler did not have Germany embark on biological weapons work.  I wondered whether that was because he was gassed in his WWI service.

See, for example, this Wikipedia article:

“On 15 October 1918, he and several comrades were temporarily blinded —and according to Friedelind Wagner,[22] Hitler also lost his voice— due to a British mustard-gas attack. After initial treatment, Hitler was hospitalized in Pasewalk in Pomerania.[23] While there, on 10 November, Hitler learned of Germany’s defeat from a pastor, and—by his own account—on receiving this news he suffered a second bout of blindness.”

describes a study that reveals that many Twitter posts about vaccines were generated by bots and Russian trolls.

I’ve not thought much of planaria since high school.

There appears to be one species prominent as a model organism

and work has been done on that

There’s a species that’s a pest in salt water aquaria.

I don’t see that any sequencing has been done on them.  Perhaps you can get these from the Coney Island Aquarium or by posting a request on a reef Facebook Group / Brooklyn Aquarium Society Facebook Group/

That planaria learn through cannibalism is questionable:

Something more solid is that if a trained planaria is cut in two horizontally and then allowed to regenerate, then the former tail end retains memory.

It’s getting to be that time of the year