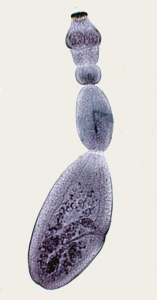 The TWiP-scholars solve the case of the Housewife from Kolkata, discuss mutations in the IL17 gene associated with cerebral malaria, and hear a case presentation from guest Michael Libman.

This week’s case concerns a 42 yo male, refugee in Canada, from DRC, former Zaire, where there is unending civil war. Upper middle class, professor of French at university. Had been imprisoned, tortured, lived in jungle for a few years, reached refugee camp in Tanzania, moved to Canada. Came to health care system 15 months after arrived. Was sent to psych, unstable emotionally, delusions, hallucinations, depression, post traumatic issues. Was under psych care for ~1 yr, did not improve, became worse. Sent to hospital. History: talked about having minor injury, hurt lower back, pain there bothering him. Some anemia (normochromic), basic hem/chem/urine/liver nothing remarkable. Physical exam, nothing remarkable. HIV negative. Some evidence for chronic inflammatory condition: sed rate 60 (elevated), had diffuse increase in IgG, IgM. Developed some low level autoantibodies; anti-nuclear, p-anka, anti-neutrophil cytoplasmic antibodies. Slightly elevated fever for a few days, then few days or week with no fever. No eosinophilia. Radiology: on CT did have some mediastinal, aortic, axillae lymphadenopathy. Prob screened in Africa for malaria and treated; prob also got ivermectin. Also got head MRI: not completely normal, classic nonspecific midbrain abnormality. Diffuse mild edema. Weight loss not remarkable. No visual problems.